This session started right where it left off - in the dungeon!  The party looked around, and Rolf had apparently run off into the depths of Bartertown looking for the ladies.  They all had smoking craters in their leathery hides, but dwarves have peculiar tastes.

Bartertown filled a 130' wide cube with precarious structures of wood and tanned hides.  A glowing pink stone sat in the middle of the town, and next to it a tower (hides stitched to a wooden frame) reared up towards the ceiling.  They glanced around and quickly saw another structure reaching towards the ceiling in the corner - this was made from printed circuit boards, tied together with leather thongs.  An unsteady neon sign read "The Hard Drive Hotel".

The party headed to the Hard Drive and spoke with the clerk, a Dark Smoker (squat humanoids with smoking craters in their skin) - "Money?  To stay here?  What do I want with your filthy fiat currency!  Barter something interesting!"  Gutboy pulled out a goblin head in a jar he had been carting around for no good reason, and the clerk was highly impressed.  "Yes, you may all stay the night.  Bring more interesting things, and perhaps we can work out a longer stay!"

The group spent a long time roaming about Bartertown, checking out the deals.  A sampling of what they saw:

a. Golem Joe's - Joe the Dark Smoker offers to make wood and muscle golems for interesting barters.  Customers must provide their own living raw materials.
b. The Boneyard - a bar run by Fracas and his two robots, who had "THUG" and "LIFE" spelled out on their chests in diamonds.
c. The Meathouse - a 7' tall fat man named Marco the Glutton runs this restaurant, serving up whatever flesh he has on hand.  Several humans were in various states of butchery.  Marco explained that they had traded themselves, which made no sense to the party.  "Yeah, they trade themselves all the time.  They'll be back later."  After quizzing Marco about babies ("Never heard of 'em") the party developed the theory that people were somehow being cloned
d. The Dung Man - Yuri, another dark smoker, runs this establishment, trading a wide variety of dried and fresh dungs.  One especially interesting turd was studded with jewels - Yuri offered to trade it for a T-Rex turd "big enough to roll around in"
e. The Dying Way - Boris the Crawler runs this weapon store.  The entrance was only 3' high, and the party had to crawl in on their hands and knees.  Kalimar traded his electric sword for the Sword of the Hand (its hilt was a hand that would refuse to let go of its wielder until he took a life).  Gutboy bartered the inoperative remote control to the BAGGER-288 for the Mace of Folly - an assassin tried to kill the Blade of Kharg with it, as it was prophesied to never be slain by a blade, and failed.  No particular powers, but it looked quite fearsome with its skull-shaped spiked head.  Finally, Kalimar eyed a syringe that his tail could wield to inject poison, but had nothing to trade for it.
f. The party interrupted a drug deal between two men (one in a black silk suit with purple tie, another in a white silk suit but wearing a pastel t-shirt) and a Dark Smoker.  The two men left disgusted at the interruption, and the Dark Smoker tried to trade his supply of mendifex spider venom to the party ("Any side effects?"  "Oh no, no, except the spiders that erupt from boils on your face.  Perfectly safe!"), but they decided against becoming subterranean drug lords.

After much shopping and exploring, the party headed back into the dungeon.  They passed by the room where a red rubbery fellow had been working on a pressure plate - the work was complete, and the party had completely forgotten the previous encounter, and poison darts from the ceiling nearly slew Bunny and Paula.  But they didn't, so ever onwards!

They next returned to the mouth of the Conjure-Man, which had been cajoling them to visit.  They rounded the corner and beheld the eyeless, mouthless being sitting atop a throne of green stone, veined with glowing green quartz.  They paid him 200 gp apiece, and the conjure-man offered vague prophecies involving events that had already occurred.  Suspecting he was more a con-man than conjure-man, Pai Mei used the Wig of Lordship taken from the mummy of "The King" to charm the Conjure-Man.  The monster was thus convinced to join the party ("My psychic powers tell me that you've charmed me against my will, but I just can't resist you with that fancy hair!").  It picked up its mouth from the wall (and its eyes from the ceiling) and shoved them back on its hideous face, and the party decided to head down to the fifth level.

They heard disturbing chanting as they went down the stairs ("Oh Coiled God, we doth loveth the way thou eatest us, and it is thus that we ascend to become part of your glorious tentacleness"), and entered a long pillared room with an altar at the far end.  The high priest wore a gold tentacled mask, and two dozen worshippers kneeled before him.  The priest shouted "Joyous day!  Sacrifices have arrived!" and the two dozen cultists began rushing towards the party.  As they did so, the priest intoned puissant tones and a ball of fire flew from his hands towards the party.  Most of the party ducked out of the way, but it hit Gutboy and the Conjure-Man right in the face.  The Conjure-Man's eyes were completely incinerated in the blast.

The party focused their arrow fire on the tentacle priest, and Rufus blinked over to bite the sorcerer's head off.  Once the cultists saw their leader dead, their morale broke, and they ran down the stairs at the far end of the room.  Pai Mei yanked the mask from the sorcerer's severed head, revealing a tentacled face.  Bunny searched the altar, and found three holes in the back - she jammed her fingers in simultaneously and blades within severed them completely, leaving her crippled.  Kalimar began experimenting with the holes, and found that by jamming in three sticks, the blades couldn't come down cleanly, and a drawer popped open, revealing the sorcerer's spell book.

Ruthlessly enough, the party then had Bunny pack the instruments atop the altar (copper chalices, a copper bowl, and a copper knife with an obsidian blade) - the bowl was cursed, and where her hands had touched it, they began bleeding uncontrollably.  Bunny began once again bewailing her stupidity in joining with this crew of heartless mercenaries.

Back to Bartertown - the sorcerer's tentacled head was traded for a 10 night stay at the Hard Drive Hotel.  Inside the building of printed circuit boards, ladders climbed the walls of Bartertown up to 6' wide cubes cut out of the stone walls.  They stayed in the highest (and thus most secure) for several nights, licking their wounds and eating goblin jerky they had traded for at the Meathouse (using the sorcerer's body as currency).  Trezgar used his arcane identification spells and found that the golden Mask of the Coiled God provided mystical protection from harm to its wearer, but would also cause his face to erupt in squirming tentacles.  Pai Mei thought tentacles would complement his horns and shoulder spikes nicely, and claimed the Mask as his own (although not yet committing to wearing it).

Two nights later, the party was awoken by Paula's screams in the middle of the night - the cultists had snuck in for revenge!  There was a brief battle, and all but one of the cultists were sent plunging to their deaths.  The last they took captive, and he begged for the mercy of being fed to the Coiled God - the party agreed.  They headed down the ladders, and discovered the unexpected consequences of the fight - the bodies of the cultists had landed upon the clerk, crushing his skull.  A crowd of Dark Smokers gathered, and they were quickly shouts of "Lottery!  The Hard Drive is going up for the lottery!"

The Dark Smokers began bargaining with each other furiously, pledging their lottery tickets to the various power brokers in exchange for other goods and favors.  A line of Dark Smokers formed at the pink stone in the center of town, the fabled  Barter Stone - a pair of the beings would place their hands upon the stone simultaneously and recite the terms of their deal, and the stone would briefly glow as the Stone recognized their pledge.  The party was approached by emissaries of both Fracas (from the Boneyard) and another Dark Smoker named Krasky, seeking ownership of the Hard Drive should they win the lottery - eventually a bargain was struck with Krasky in exchange for providing a free room when they were in town.  Soon enough, all the deals were signed, and the drawing took place - one of Fracas's supporters won, the hotel was exchanged, and the Hard Drive had its new owner.

Krasky informed the party "Better luck next time, ey?" at which point Gutboy informed him that their deal was still in force - nothing had been said about whether the hotel was successfully acquired by Krasky.  Krasky fumed as he realized he had been lawyered - Gutboy tried to convince him it could be good for both parties, and perhaps they could do a favor for Krasky someday.  Krasky seemed unconvinced, but was unwilling to break the deal, and agreed to find lodgings for the party while they were in town.

The lead rot was starting to set in, so myself, Razoe's player, and Pai Mei's player sent all our unpainted minis off to Ed at PrimEvil Studios (http://www.primevilstudios.com/) for some pro painting (none of us have the time or patience).  He did a fantastic job, and here's what just came back in the mail: 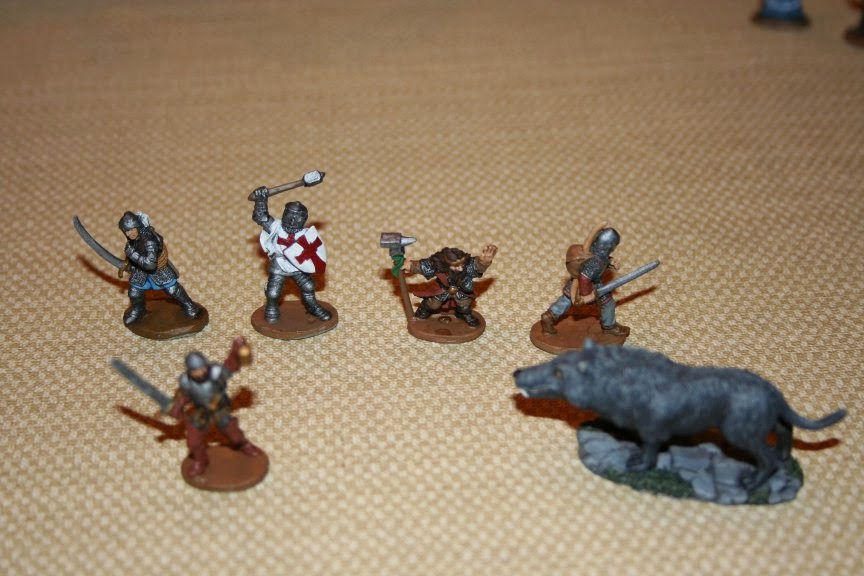 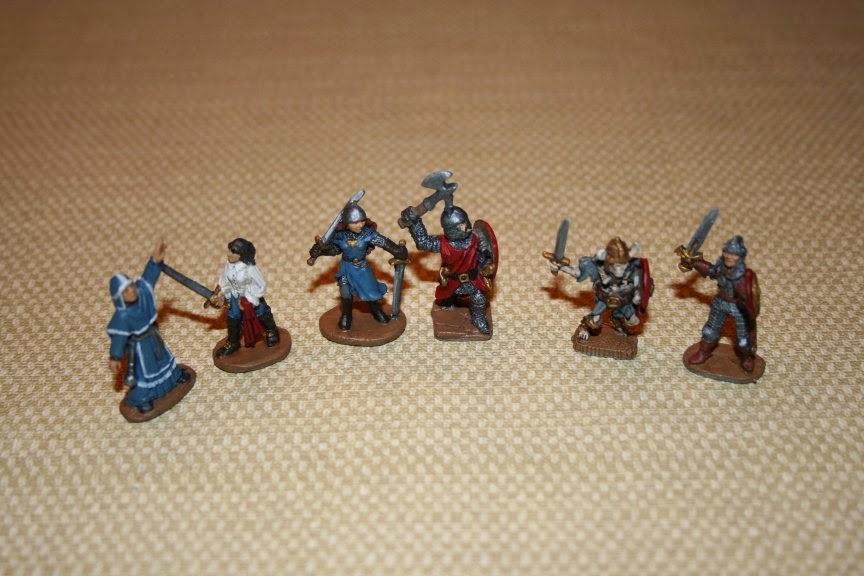 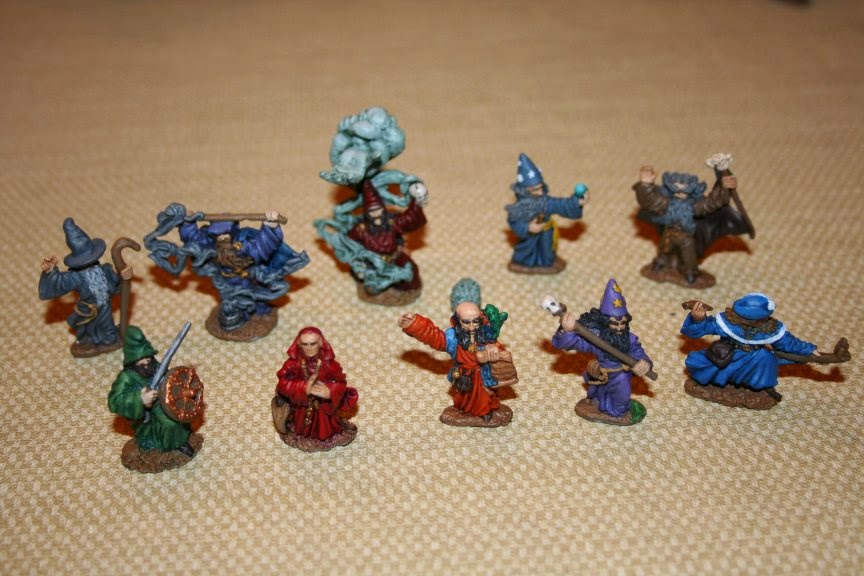 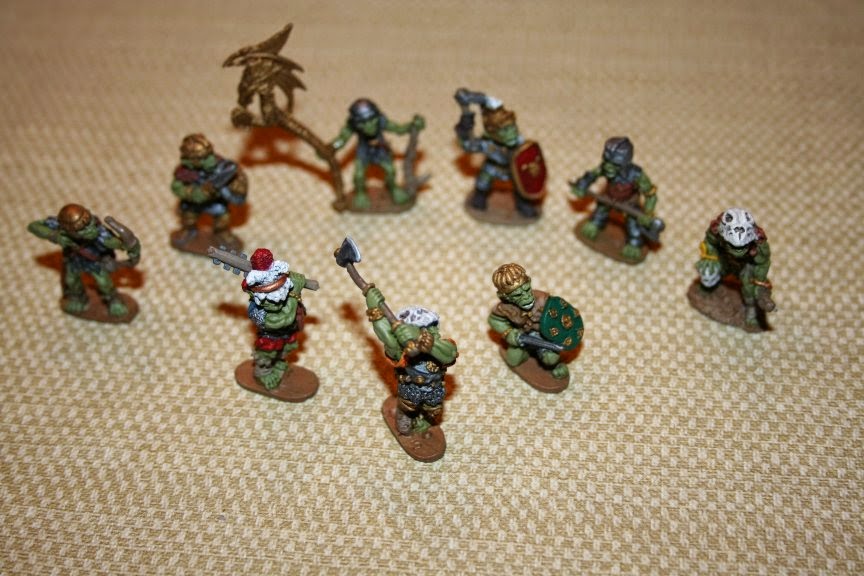 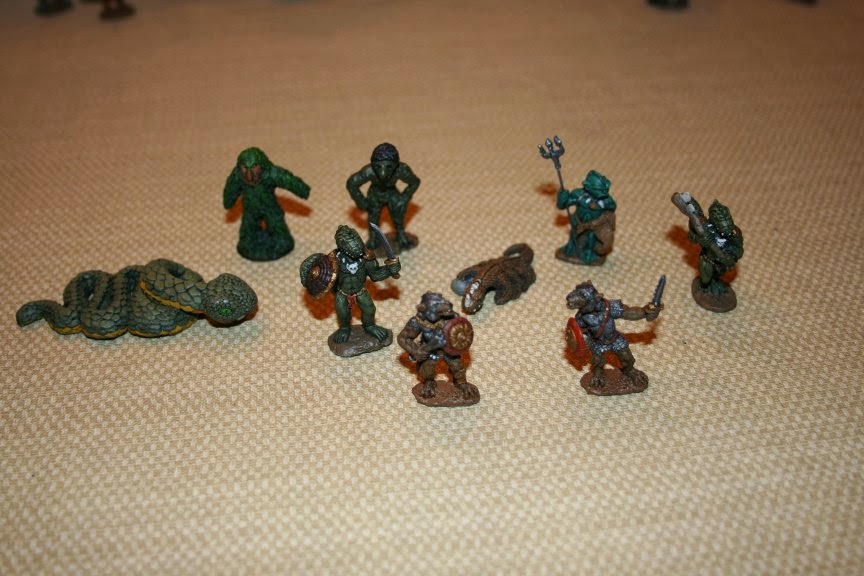 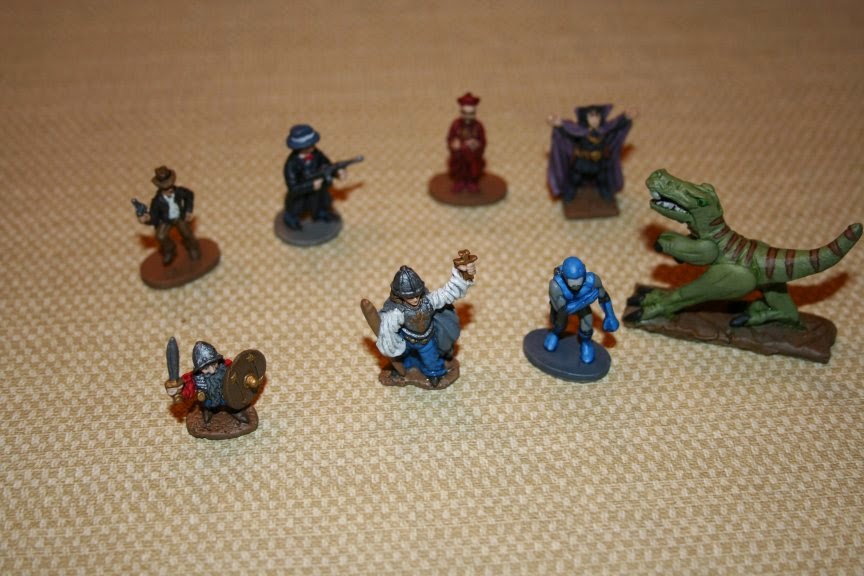 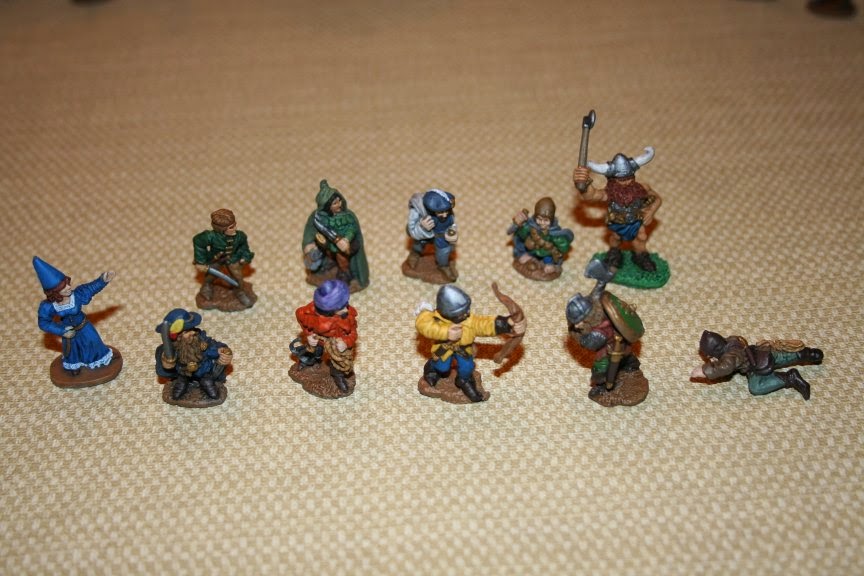 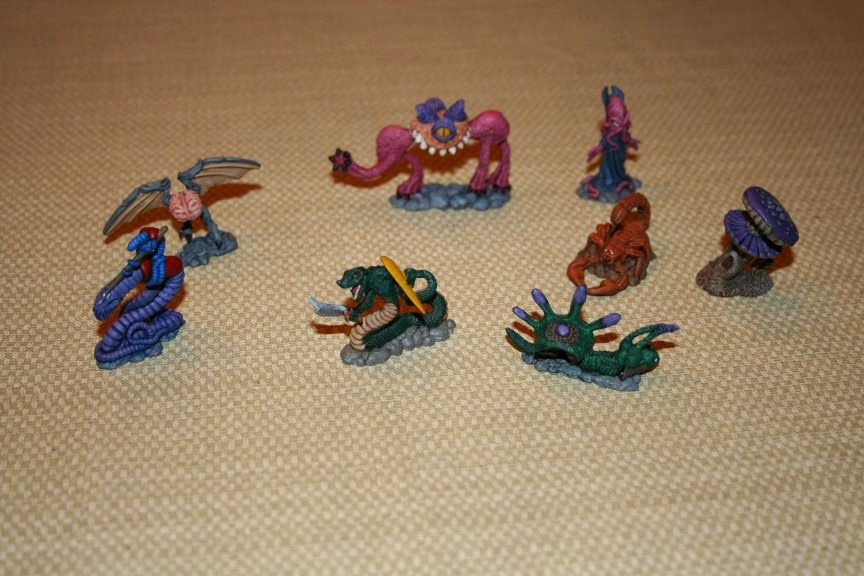 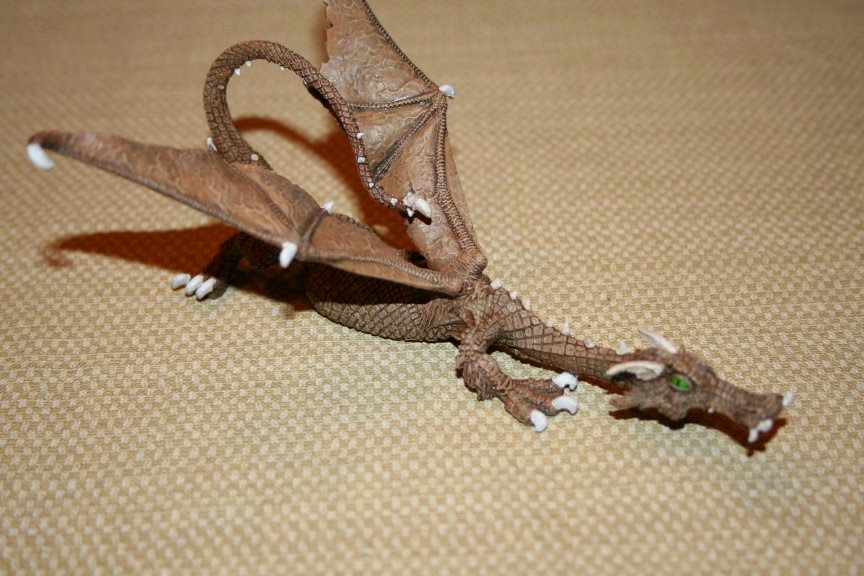