Another review!  Got a game tomorrow, so instead of prepping like I should, I'm doing this! I present to you F1 - The Fane of Poisoned Prophecies by Guy Fullerton.  Note that this review has SPOILERS, which shouldn't be a shocker since it's a review of a module, but there you go.  Don't read if you ever intend to play it. 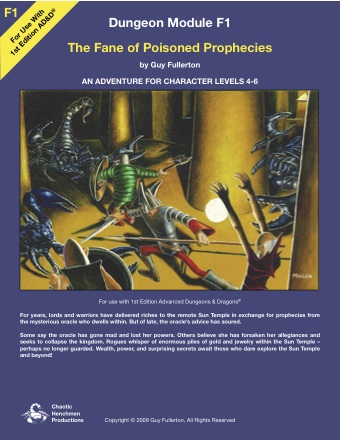 Yes, this came out quite a while ago, but I'm reviewing it anyways.  I just picked it up a few weeks ago, and this is pretty good.  It's got a somewhat fairy tale vibe, which I don't usually go for, with some guys building a stairway to the moon, and then hiding the entrance in the temple to the sun-god.

What made it work for me was the villains - a pack of lazy werewolves, sent by the werewolf boss of the moon, to go seek a way to control their shapeshifting (you know, on the moon, it's always a full moon).  I imagine those guys being played like a biker gang, kicking back with their biker ladies and raising hell in the temple.  I can work with that, and totally trash the fairy tale vibe in the process, because that's just how I am.

It's got quite a few puzzles - they are good, but they are also tough.  They are mostly of a nature where you manipulate something from a distance, so you don't see whether you've done anything or not immediately - which means that players will probably not persist in trying to figure certain aspects of the dungeon out.  Some NPC interaction would need to be added to provide incentive for PC's to work them out.

The conceit behind this is there's a moon staircase, that nobody knows about.  And there are werewolves, who've gone and chased off the prophetess and are pretending to be the mysterious oracle of the sun temple, and give out crap prophecies in exchange for gold.  Pretty sandboxy, players show up for whatever reason they like, and then interact with a bunch of thuggish werewolves and the mechanisms of the temple.

Anyhow, easy enough to drop in to any campaign I can think of, and I can see this working out very well in play.