I've just finished reading Weird Adventures by Trey Causey (of the wonderful From the Sorcerer's Skull blog).  It is awesome, go buy it now if you haven't.

Reviews should probably offer a bit more than a command to purchase.  The book describes, in broad strokes, an alternate Earth, where D&D magic and monsters exist alongside the 1930's of our world, and then in detail deals with one place in particular - the City, an alternate version of New York City.  The neighborhoods and boroughs are covered in detail, and full of adventure seeds.  It concludes with a short list of monsters specific to his setting.

The city is simply outstanding, and the adventure hooks are wonderful.  The underworld is run by the Hell Syndicate, who send their Hit Fiends to rub out the competition.  The homeless are urban druids, served by feral children who roam Central Park.  The sinister sorcerer Tsan Chan runs the Chinatown (well, Yiantown) gangs, and General Brant's Tomb contains the horrible thing that General Brant became.  The book is loaded with adventure hooks like that - it's impossible to run out of things to do in the City.

The art is amazing.  It's very very evocative of its pulp inspirations.  The cover is a crazy-good homage to the original Player's Handbook, with turbaned magician, gun moll, and tommy-gun wielding gangster acting as the archetypal adventuring party.  The art inside is just as cool, with hillbilly giants, hoochie-mamas, beholders stalking treasure-seekers, and a further homage to the DMG cover.

There are weaknesses.  One thing it's missing is a section on 1930's weapons and armor (well, trenchcoats and fedoras, I suppose).  Some guidance on these would be useful in running adventures in the City.  Trey's got a lot of "magic item" type material he's been putting up on his blog, perhaps it is slated for an item-focused sequel?  A short introductory adventure would also be useful for referees who want to leap into the City feet-first.

Overall, it's an awesome book, and great for a pulp/noir D&D game. The City is on the list of places my own players may end up, when they get to the various otherworldly portals in the dungeon.  I've been waiting for its publication for some time (along with Dwimmermount, Planet Algol, and Stonehell 2 - get a move on people!), and it was totally worth it.  BUY IT!  BUY IT NOW! 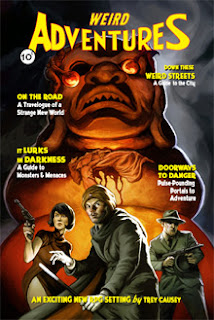